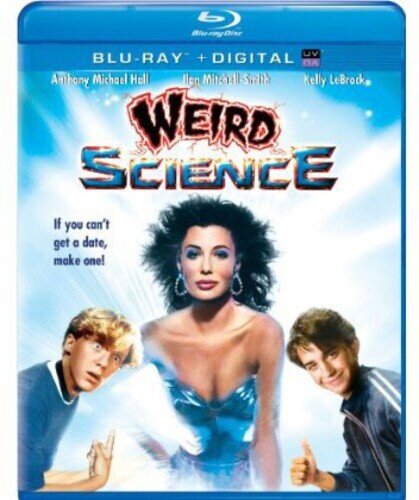 Teen life is full of mysteries, but nothing is more hilarious or more fun than Weird Science, the out of this world comedy that helped define a generation! Join two socially challenged computer whizzes as they set out to create the "perfect women". Like a computer generated fairy godmother, the duo`s heavenly creation guides the pair through the pleasures and pitfalls of teenage life. From writer/director John Hughes (The Breakfast Club, Sixteen Candles), Weird Science: Flashback Edition is digitally remastered and includes all-new bonus features and is ready for re-discovery all over again !

The Frankenstein legend takes an uproarious twist in this outrageous special effects-laden comedy from the writer-director of Sixteen Candles and The Breakfast Club. Critically acclaimed filmmaker John Hughes is at it again, giving nerdy computer whiz Ilan Mitchell-Smith and his best friend, Anthony Michael Hall, power to create the "perfect woman" (Kelly LeBrock). Like a computer-generated fairy godmother, the duo`s out-of-this-world creation guides the pair through the pleasures and pitfalls of adolescence. With a rock beat supplied by many music superstars including Oingo Boingo, this far-out sci-fi fable brings everyone's favorite teen fantasies to life through the miracle of Weird Science.