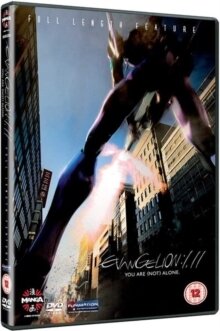 Tokyo-3 still stands after most of civilization was decimated in the Second Impact. Now the city endures the ceaseless onslaught of the deadly Angels, bizarre creatures bent on eradicating the human race. To combat this strange and ruthless enemy, the government agency NERV constructs a fleet of towering humanoid machines - the Evas - and Shinji Ikari is called into action, reluctantly taking his place at the controls of Eva Unit 01. Living a life of loneliness and questioning his existence, Shinji struggles to accept responsibility for mankind's battle for survival. Shinji will fight the Angels alongside the only person who might understand his plight: Rei Ayanami, the elusive and frail pilot of Eva Unit 00. Shinji and Rei will struggle to learn a simple truth: when carrying the burden of humanity's survival on your shoulders, you are not alone.

The rebuild of the groundbreaking giant robot anime! The year is 2015, and half of the Earths population is dead, victims of the disaster called Second Impact! Answering a summons from his enigmatic father, 14-year-old Shinji Ikari arrives in the rebuilt city of Tokyo-3 just as a gigantic creature known as an Angel attacks! Forced into the cockpit of a giant bio-mechanical construct known as an Evangelion, Shinji must defend the city from the rampaging Angel or die trying! Rebuilt from the ground up by creator Hideaki Anno, this is the definitive Evangelion for a new generation! Featuring a radically new storyline, completely new animation, additional CG plus never-before-seen extended footage.