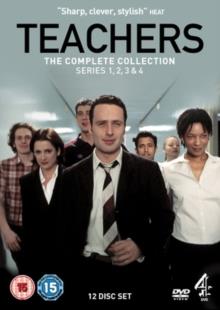 Complete, collected episodes from four seasons of the Channel 4 drama set in Summerdown Comprehensive, where the teachers are just as juvenile (if not more so) as the teenagers they are supposed to be educating. Series 1 follows the misadventures of teacher Simon Casey (Andrew Lincoln), who has as many problems in his personal life as he has in his classroom. Lowlights of his school year include being kicked out of his father's flat, getting dumped by his girlfriend and getting caught smoking a joint with a pupil. In Series 2, the focus shifts away from Simon as he decides his life is boring and buys a one-way ticket to South America. But there are still intrigues and politics aplenty unfolding at Summerdown... In Series 3, it`s business as usual for the young teachers who specialise in immaturity rather than the traditional subjects, as they continue to spend their working life making friends, falling out, trying to figure out the opposite sex, smoking in the playground and dealing with lippy pupils. In series 4, Summerdown Comp has merged with a rival school, Bob (Lloyd McGuire) goes in search of a Thai mail-order bride, and the rest of the staff begin to suspect that Penny (Tamzin Malleson) is a Nazi after learning that her real surname is Eichmann.