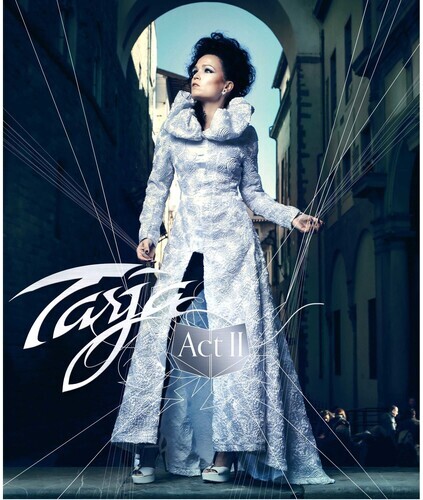 Filmed during Tarja’s world tour “The Shadow Shows”, during which the influential heavy rock singer circled the world for 7 ½ times with over 300.000 km travelled and played over 200 shows in 40 countries in front of 1 million people.

“Act II” consists of the singer’s very intimate set filmed and recorded live at the Metropolis Studio in London, UK and the breathtaking live performance of one of her shows in Milan, Italy, as well as previously unreleased interviews and photo galleries. Even though the shows deliberately differ in look, sound, approach to the music and adrenalin, both have one thing in common: from the very first to the very last tune, the state of the art production displays Tarja’s energetic performance and her graceful, charming presence.

“Act II” keeps the energy and aesthetics of its predecessor, but adds a new chapter to the live saga in a brand new way.

Says Tarja:
“Live videos became more and more mere documentations focusing on a band’s performance in a remote, distant and technical way. The lightshow and the LED’s only support the band’s performance but have no significance of their own.
With “Act II” it is different. Here everything has a significance, every little detail is important because it is not only a live-recording, a live-documentation.
In the video, every song was treated in order to transport the feeling I wanted to express live at the show. As close as possible to the way the audience might have felt it that night. We used additional footages, used video snippets, photos and graphics and worked with lights, framings and reflections, changed colours and created moods, distorted pictures and inserted slides. And sometimes we kept the pure picture because itself it transported everything we wanted.
“Act II” is not a live-video, it is a live-art-video and you are free to discuss it very controversially; which is exactly what I want.”