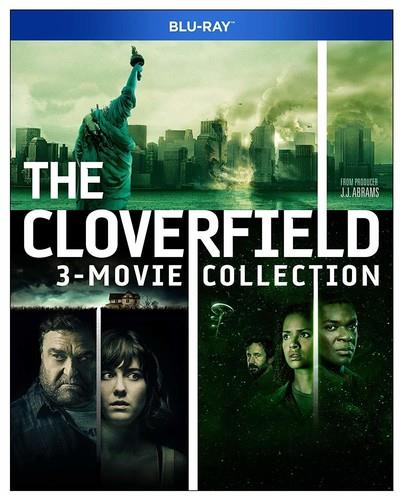 Cloverfield
Five young New Yorkers throw their friend a going-away party the night that a monster the size of a skyscraper descends upon the city. Told from the point of view of their video camera, the film documents their attempt to survive the most surreal, horrifying event of their lives.

10 Cloverfield Lane
Outside is dangerous…inside is terrifying in the heart-pounding new thriller from producer J.J. Abrams. After a catastrophic car crash, a young woman (Mary Elizabeth Winstead) wakes up in a survivalist’s (John Goodman) underground bunker. He claims to have saved her from an apocalyptic attack that has left the outside world uninhabitable. But, as his increasingly suspicious actions lead her to question his motives, she’ll have to escape in order to discover the truth.

The Cloverfield Paradox
Producer J.J. Abrams takes you deeper into the Cloverfield universe than ever before with this mysterious sci-fi thriller. Orbiting Earth on the brink of a devastating energy war, scientists prepare to test a device that could provide unlimited power… or trap them in a terrifying alternate reality. Starring Gugu Mbatha-Raw, David Oyelowo, Daniel Brühl and Chris O’Dowd, The Cloverfield Paradox is the ultimate journey into the unknown.